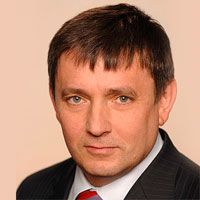 In 2007-2009 he worked as Chairman of the Sverdlovsk Region Government. Dr. Koksharov was appointed the Rector of Ural Federal University by the Decree of the Chairman of the Government of the Russian Federation, Vladimir Putin.

Participated in the study programme of the US Information Agency for the State Support for Small and Medium Business. Underwent internship within the programme "Direct foreign investments' in the  Joint Vienna Institute.

Fluent in German and English. Married. Has a daughter.