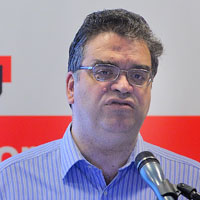 Head of Cybermetric Lab - Scimago Group, IPP-CSIC, Madrid, Spain. Isidro Aguillo is the Head of The Cybermetrics Lab, a research group of the Instituto de Políticas y Bienes Públicos (IPP) of the Spanish National Research Council (CSIC).He is the editor of the Rankings Web (Webometrics), including the Ranking Web of Universities (since 2004), Research Centres (since 2006), Hospitals, Repositories and Business Schools (since 2008).

He is the founder and editor of the journal "Cybermetrics", the first electronic-only journal of the CSIC. He has published more than 60 papers in international journals on such research topics as evaluation of the scientific activity, electronic journals, open access initiatives and specially webometrics and web indicators.

His teaching activity comprises more than 400 workshops, seminars and conferences in more than 80 Universities and professional societies worldwide. In 2000 he was appointed to the Spanish Office for Science and Technology (SOST) in Brussels. In 2002 he was grantedMetcalfe Visitor Professor in the University of New South Wales in Sydney (Australia). He has an MSc in Biology (University Complutense, Madrid) and an MSc in Information Science (University Carlos III, Madrid). He was awarded with the IWE 96 prize, given by the Spanish information Science Community. In 2009 he was invested Doctor Honoris Causa by the University of Indonesia. In 2015 he received his second Doctor Honoris Causa from the Russia Nuclear Research University.